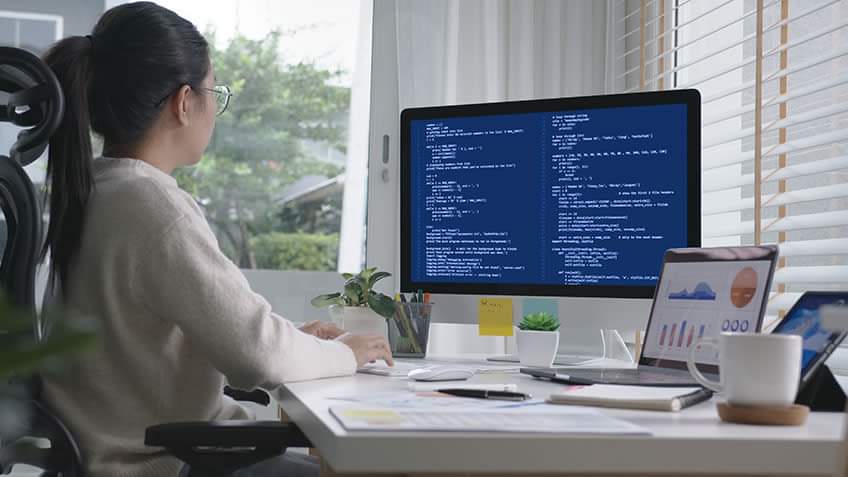 In comparison to various other programming languages, Python allows developers to write programs in fewer lines of code. Also, the modules and packages supported by Python facilitate code reuse. Today, a number of enterprises are investing in Python development services for their software application development projects. Various well-renowned companies such as Spotify, Instagram, Dropbox, Disqus, Pinterest, Bitbucket, and many others are already using Python in their technology stacks. The Python programming language is a versatile language that finds its usage in all kinds of web projects starting from simple to complex projects.

Some of the key features of the Python programming language are:

Some of the key benefits or reasons to invest in Python programming language for web development include:

Python programming language is quite simple to use and read. It is very much similar to the English language that most people use today for communication purposes. And that’s the reason anyone can learn the language easily and join the programming community. Python programming language is very much easy to read as well, thus developers usually find no issues in understanding the code written by their fellow programmers. Besides, the simplicity of syntax allows developers to handle complicated systems with ease and ensure that all the elements have a clear relationship with each other.

Asynchronous coding or programming is a type of parallel programming in which the developers can submit the request and perform other work that’s waiting in a queue while waiting for the submitted task or request to finish. Python language is completely free from research contention, deadlocks, or any other complex issues. Thus, developers can efficiently write and maintain asynchronous code using Python. This further helps to enhance the application performance and responsiveness.

Being one of the fastest developing coding languages, Python allows for rapid prototyping and iterations. This makes the development process much easier, efficient, productive, and quicker for the developers. Quick development work means faster time to market. This is another beneficial point for businesses, especially startups as they can launch their project in the market and gain a competitive advantage over others.

Since Python is an object-oriented programming language, it allows users to organize different behaviors and properties into various objects and classes. Each one of these classes comprises a function. In case an error or issue occurs in any part of the code, the other parts will not get affected. In all, the object-oriented programming functionality of Python language simplifies the entire development process and makes it enormously cost-efficient and less time-consuming.

Python supports a huge standard library that is rich in pre-written codes. This saves a lot of time for the developers by eliminating the need to create basic codes. These libraries also allow developers to easily manage and convert the data required for uninterrupted data processing in Machine Learning (ML).

Python programming language can be integrated easily with other programming languages such as Java, .NET, PHP, etc. These languages are generally used in enterprise development. The smooth integration of Python with various other languages makes Python a perfect choice for enterprise software applications. Moreover, in case of complex mobile applications, the developers can use Python as a glue language to bring together the new and old fragments of infrastructure.

Python has a number of frameworks that assist developers in simplifying the entire development process. Some of the most popular frameworks of the Python programming language include Django, Pyramid, TurboGears, Flask, etc.

Python has an array of libraries and packages that developers can use to develop various scientific and numeric applications as well as toolkits. Some of the widely used libraries, packages, and tools are SciPy (Scientific Numeric Library), Pandas (Data Analytics Library), IPython (Command Shell), Numeric Python (Fundamental Numeric Package), and Natural Language Toolkit (Library for Mathematical and Text Analysis).

In today’s time, both Machine Learning (ML) and Artificial Intelligence (AI) are the most popular and widely adopted technologies. A number of developers are implementing these technologies into various projects. For the implementation of these technologies, a number of developers prefer Python over other languages. The reason behind choosing Python is that it provides competent ML and AI packages, and tools for better results.

Read Also :   8 Ways You can Become a Web Designer - A Complete Guidance

Social Networking Sites You Need to Know About in 2021