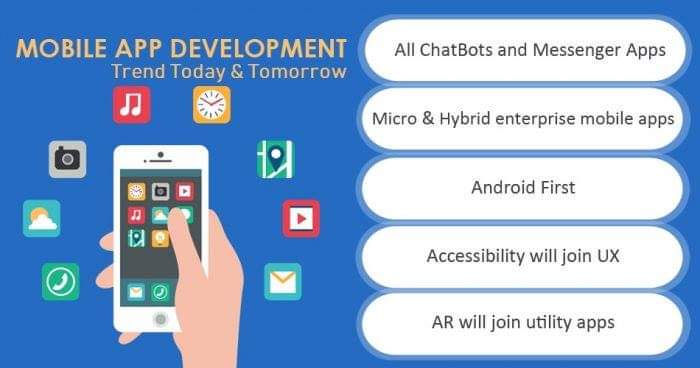 In this digital world, mobile apps are promising solutions for different tasks such as the calling of a cab, online shopping and searching for a particular place etc. Along with the virtual reality apps, the folks can buy the property without any need of visiting the property. More and more innovations are entering this gigantic world day by day and it totally changed the way we live. Let us be ready for the change and prepare for the futuristic changes.

A tremendous change from cash Payment to Mobile Payment

Nowadays, the usage of cash has become less, since most of the folks prefer to pay through the digital wallets. A recent report exclaims that the in-store mobile payments are expected to reach about five hundred billion dollars by the end of the year 2020. The annual growth is also expected to grow more than eighty percent in between of the years 2015 to 2020. On the other side of the flip, in the US, the overall store mobile payment is expected to reach one hundred and fifty million by the year 2020.

This one totally amounts to about fifty-six percent of the consumer population of that concerned year. According to the financial report, the usage of mobile payment in China was almost fifty times more than it was in the US before. At the same time, it is also expected to multiply by the 8 times in the year 2019. The total annual transaction time is about billion dollars for the specified year of 2019 is 1080. Both the tech giants have the Google pay and the Apple pay to stay in the tune along with the mobile payment trend.

AR and VR- Notable ones

Both AR and VR are the reliable trends which flourished in the year 2018 and it will be continued in 2019 too. In the upcoming days, the popular apps are on the realistic verge of releasing the AR filters which automatically turn the human faces into the digital characters. Health care is also one of the good examples for the integration of AR and VR especially for the exclusive surgeries and the operations. Mostly, the small business app developers use the concept of AR and VR mechanisms.

At the same time, the Artificial Intelligence can also help the app transformation from the initial phase to the final phase. The overall market value of the virtual digital assistant is about five thousand two hundred and sixty-one million US dollars for the year 2018 and it is also expected to grow more than eight thousand five hundred million US dollars in the year 2019.

Any electronic devices such as the lights, TV in your home can be managed with the aid of the mobile device, where the Internet of Things plays a major role. Day to day life is cleared up with the IoT connected devices. Nowadays, the software can be included in any of the network connectivity zones and can be controlled through a series of IOS apps. The data can be exchanged without any need of the human interaction. It is a reliable technology for the app development and it is one of the biggest trends which are going to be ruled in the year 2019.

Generally, the Smartphone is preferred to be integrated with the location sensing and motion sensing too. They overcome issues such as power saving, Anti-theft including security issues. On the other side of the coin, the location-based apps suit for the gaming, fitness apps including the vehicle navigation.

Generally, cloud apps have enhanced security, surged productivity, and lower operational cost including uninterrupted performance. It can tackle the security-related issues and it is going on the right track too. Yes, no doubt the mobile apps going to be fast, reliable and highly secured. The Block chains apps are the one which is not limited only to the bit coin. It maintains all the records for the overall digital transactions that are taking place.

Nowadays, the wrist watches are connected to their Smartphone in a reliable manner. It records the calories burnt, steps walked, heart rate and the hours slept etc. It is expected that the wearable devices will exceed over eight hundred and thirty million in the year 2020. In order to stay healthy and fit, these ones are used.

In the present era, the Beacon technology is ruling the world and its apps are spreading globally. They are not limited to any of the categories and it has a great spread over. On the other side of the flip, it is also used as the virtual guide for all the users.