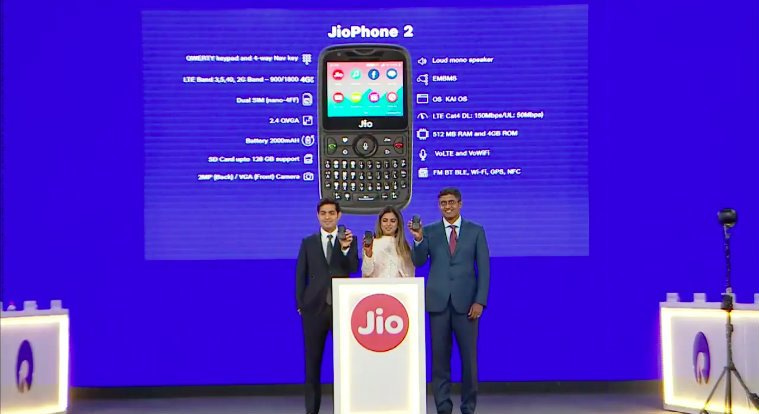 Reliance JioPhone 2, the successor to the JioPhone, has been launched by Reliance Jio. The announcement was made at the company’s 41st Annual General Meeting (AGM) on July 5. JioPhone 2 features a horizontal display along with a full qwerty keypad for a better user experience. JioPhone 2 will be available at an introductory price of Rs 2,999 and will go on its first sale on August 15.

Reliance JioPhone, which is the predecessor to JioPhone 2 comes with dual-SIM compatibility and sports a 2.4-inch QVGA display. It runs on KaiOS which recently announced a partnership with Google to bring all of its apps to the platform. The device comes with 512MB of RAM along with 4GB of internal storage expandable up to 128GB via a microSD card. All of this is backed by a 2,000mAh battery.

The JioPhone 2 sports a 2MP primary camera on the back along with a VGA front camera for taking selfies and making video calls. In terms of connectivity options, the JioPhone 2 includes 4G, VoLTE, VoWiFi, 3.5G, 2G, WiFi, LTE Cat4 DL, FM Radio, Bluetooth, GPS, and NFC.
During the AGM 2018, Reliance also announced that the Facebook, YouTube, and WhatsApp applications will soon be made available on the JioPhone. These apps had been hugely missing from the device since its launch and are now going to make an appearance on it. Notably, these apps will also be available for download on the new JioPhone 2.